Hundreds of young aspirants are playing for the school and college leagues of their baseball matches. Everyone in the room field is not the same. Some are hard working and some are good players. But there are a few in every field who are unique and extraordinary. Their star performances help to succeed in every match.  These players must be recognized by the universities or their own coaches. Being appreciated is the only gift which a sportsman desire.  Baseball is a game played by every small or big school and college. Thus they produce hundreds of such deserving candidates.  This certificate of the most valuable player is one such certificate given as a token of love and recognition.

Not only for baseball these certificates can also be used to recognize different sportsperson in their field.  MVP commonly known as the most valuable player is awarded to a team member who has performed brilliantly in the past matches. This is generally judged by the coach of the team. The decision can vary upon the whole season a particularly outstanding performance.

Structure of the MVP Certificate 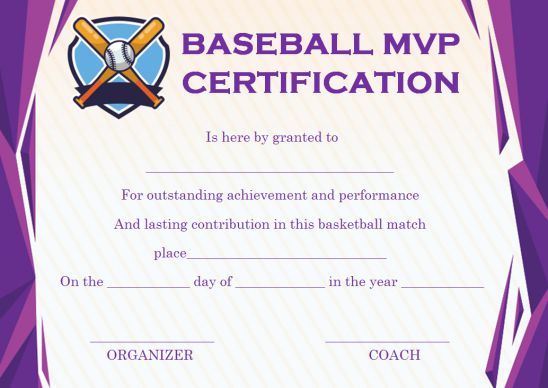 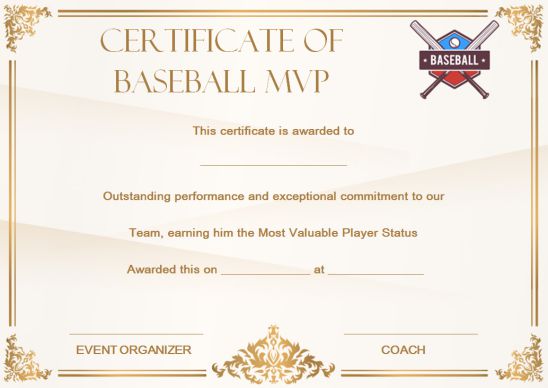 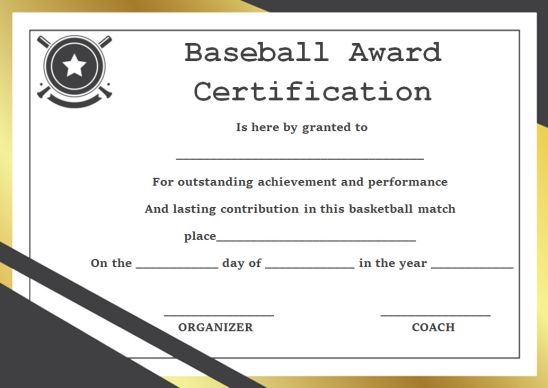 Title – The section generally covers the award title.  The wording should ideally be the Most Valuable Player. As this is a sports certificate you can deviate from your traditional style of font. There can be a bold usage of colours. Pictures or symbols can be used as a part of this title.

Recipient’s Name– The section is dedicated to the person who is being awarded appreciation.  You can also choose to mention the recipient’s nickname or the sports name popular on the field.  This can be a new gesture while awarding.

Presentation Wording – This is the introduction area where you can briefly mention the purpose of the award.

Presented by – This section is dedicated to the presenters who are giving the award.  This is generally the organizers or the league committee.

Date – The date represents the date when the award was given.

Logo – the logo can be put beside your signatures or can also be included at the topmost area beside the title. The logo refers to the specific tournament season or the university staging it. 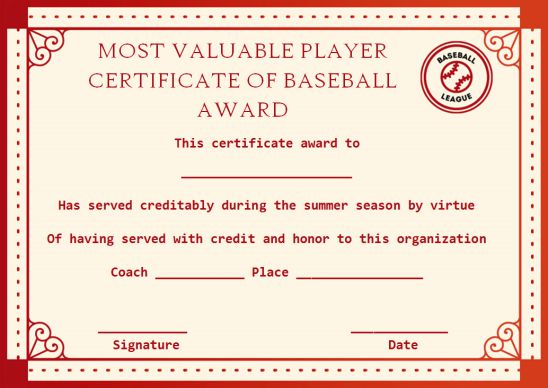 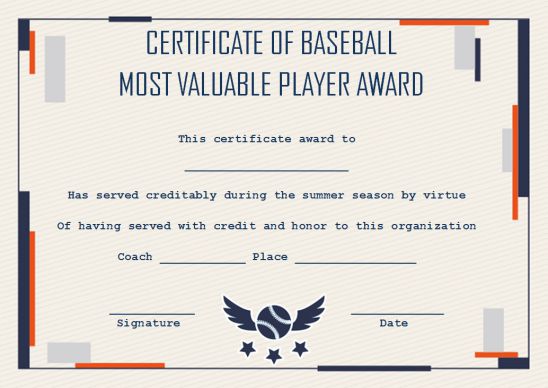 These award certificates are the best form of recognition and appreciation. They leave us in a motivated spirit.  We will help you with a few wording options.

Most Valuable Player Award- This certificate is awarded to _____________ (Recipient Name). Thank you for your continued commitment to achieving great success in this field. You made the difference. 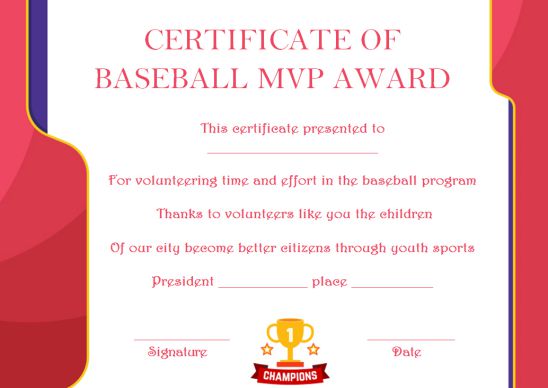 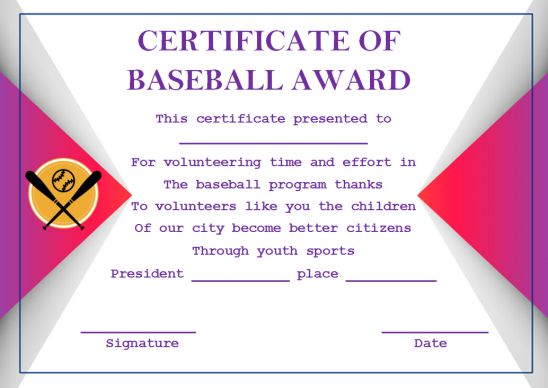 When designing your template for the most valued player, you can use a baseball logo or image to add to the certificate. There is s a huge probability that your club or league had a logo. Try and experiment with it and further add it to your template.

There are a few other creative options like adding a group photograph on the background. But don’t add the image directly, try to customize it and place it accordingly.

Certificate of Sportsmanship – This certificate is handed over to extraordinary performances in a particular season of matches. It follows a particular format includes:

Title – The title needs to be appropriate for the ceremony. It should describe the award perfectly.

Presentation Wording – This is the conjecture which attaches the title to the other part of your certificate.  The font should be in contrast to the title. Try to keep the font in Italics with a

For instance – is hereby presented to, this is to certify that, awarded to.

At the bottom, you can get it undersigned by Class Advisor and School principal

This is proudly given to ___________ (Recipient Name) for showing remarkable Baseball skills in High Sports Fest 2020. 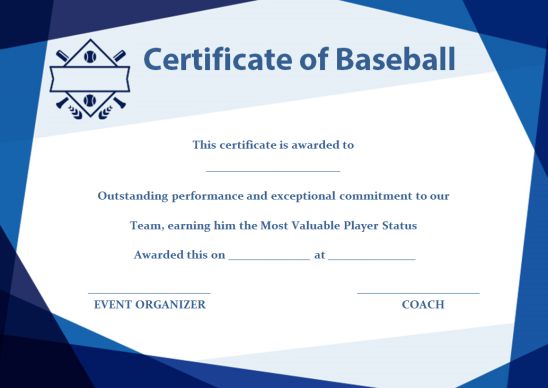 Logo – The logo used can represent the baseball team or the University logo. The logo can be placed at the top middle of the certificate or beside the signature section.

There are also other options of creativity like baseballs symbols or the team’s group photography to add a personal touch and make it special. 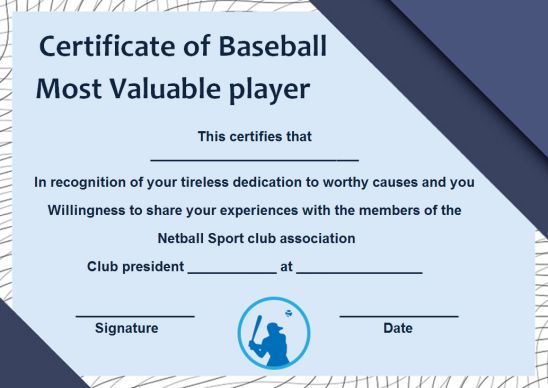 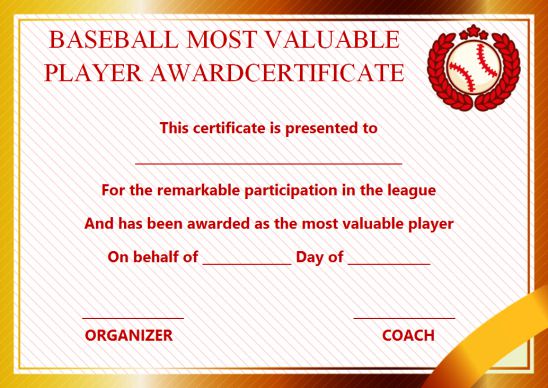 These certificates are those players who have up their game over the years or throughout the season. Players in every sport put in a lot of effort into their games. With hours of spending on the field, every player is motivated towards improving his game. As a coach, it is your responsibility to pick up on such traits and acknowledge. The Most Improved Player award is the ideal award to give when a player has shown a tremendous change in his sport.  Improvement is an important area of recognition. They encourage the person to keep up the good work. This is a perfect method of recognition.

For the fonts and creative, try to be subtle yet a little creative with the colours and the fonts.

The title says – Most Improved Player

What is Baseball MVP Award?

MVP is a Major League Baseball award generally given to the player who shows outstanding performance in the American League and National League. It has been by the Baseball Writers Association of America (BBWAA) since 1931. On the other hand, the winners receive the official award ‘Kenesaw Mountain Landis Memorial Baseball Award’, in honor of the first MLB commissioner, Kenesaw Mountain Landis, (served from 1920 until his death on November 25, 1944).

Who announces the MLB MVP awards?

The MVP (Most Valuable Award) will be announced by the The American and National League heads and members. The MVP player is selected based on the votin poll results. And the voting process is conducted by the Baseball Writers’ Association of America. Voting takes place before the postseason but the most awaited results are announced only after the world series.

What are the facts to know about MVP award?

Since 1911, there are three different official most valuable player awards in Major League Baseball history. i.e. the Chalmers
Award (1911-1914), the League Award (1922-1929), and the Major League Baseball Most Valuable Player Award (MVP). The full title of MVP was the Baseball Writers Most Valuable Player Award, and first awarded in 1931. It is presented every year by the Baseball Writers Association of America.