One of the best ways for students, researchers and all those who yearn to learn a subject with scientific details must adopt this claim evidence reasoning method called CER in short. Yes, it is a fantastic method which lets the students think and apply their brain and understand the concepts. So, let’s see how we can implement this study in the best way.

Alongside, we also promise to provide you with free claim evidence reasoning template for different grades and different subjects letting you teach your kids effectively.  Even as an individual you can make use of these templates to learn in the right way.

We will now walk you through four CER templates which are required in day to day life. It is good to nurture students from elementary classes to adapt to CER framework letting them think broader manner.

Each subject will have a unique CER and that is why we require templates separately for various subjects.

You must make your claim in the first paragraph after writing the topic. In science, you can use the CER method for physics, biology or chemistry. However, these entire claims must be backed by scientific evidence.

Scientific evidence can be the data that supports the theory behind the science or the hypothesis. Based on the scientific method this evidence or interpretation are expected to be practical.

Scientific reasoning actually includes the thinking ability namely the inquiry, experiments, evaluation of evidence, inferences, and argumentations. All these are done per the scientific understanding.

An argument is a claim in social studies. The students are expected to write an argument after summarizing more materials and repeating what is said already. Write the claim for a topic or an issue. Acknowledge and distinguish the claim with opposing claims. Support claim with logical reasoning. Provide a conclusion.

Types of evidence for social studies claim. It can be a figure, fact, detail, quotation, data from other sources or even information to support the claim. Critical reading is important to make an argument in social studies. Unlike science which can take a sample size for investigation, social studies can be done only by reader interacting with the text, asking questions and evaluating the author’s statement.

The word problems can be addressed using the CER method in Math. Soon after the question is given, the student can make the claim. Then give evidence by explaining the approach to do the sum in words. Finally, should tell in detail as to why did he/she choose that method to solve the problem.

The student can solve in a problem in more than one way, but he should collect evidence about the method he has chosen. The evidence is the methods available to solve a problem and reasoning section must explain why that particular way was chosen. Only when this is convincing the student scores full mark. Even if the claim is correct but the student fails to provide proper evidence or reasoning, then he may not get full marks.

Grade 1 to 8 comes under elementary schooling. Children can get exposed to CER method from their grade 2. They will be able to answer and reason at this age. It is a good practice to get them used to this method at childhood to sharpen their critical thinking ability.

What Is It And How It Is Being Used

First thing first and we start with the basics. We will help you to teach your kids to think critically and structure an explanation and then implement the CER framework.

We will break it down one by and one and understand them thoroughly.

Claim – Claim is the statement made after a student understands a concept, phenomenon, or a result of some study. It can be understood better with the following 4 things.

In simple words claim is a comment made by the investigator about his/her understanding of the study.

Evidence – The data used scientifically to back the claim one made is called the evidence. In short, it is the data collected to provide support to the claim.

Every evidence is accepted as evidence only if it is

Reasoning – Linking the evidence to the claim and proving the study can be done only when the reasoning is initiated.

There is a claim and enough evidence is collected, but only when one starts thinking about the how and why it can help to conclude on the study favoring the claim.

The reasoning is a process carried out to justify each evidence that supports the claim and its need.

It includes scientific principles relevant to the claim and the evidence.

How it is being used in real life

Every individual can become a scientist if they have some knowledge, flair and the right guidance. The best method to make think is to introduce them to the claim, evidence and reasoning methodology. The student must be trained to claim their hypothesis by collected relevant evidence by conducting an experiment. Which means, they need to prove their conclusion with proper evidence by making clear reasoning.

Let us take two cases here to help you understand how to educate kids to start using CER model.

In the scientific approach, the students must be given a question and asked to do a research. When they come out with the prototype and then ask them to summarize the experiment. Now, let them collect evidence in the form of materials and procedure. With the help of the scientific diagrams and data let them arrive at the conclusion.

The same CER can be used in engineering method by taking a problem and working on it. Use the available materials and extensive survey to add to the available evidence. One should think about all possible solutions with the evidence. Next, reason out with diagrams, and build prototypes. Finally, conduct the test and get as many data possible to make a conclusion.

However, both ways will have their own iterations until the claim is proved.

It can be written in the following forms given below 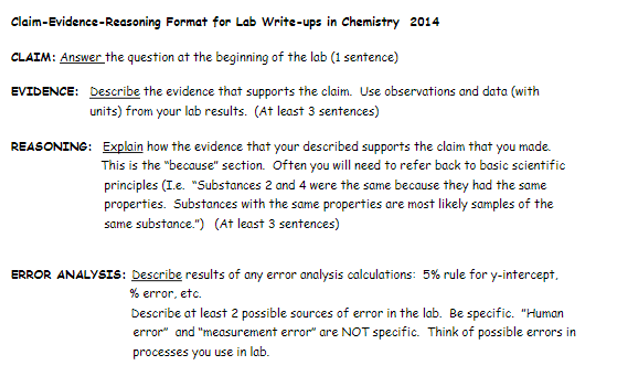 Wordings (things to be included)

The answer to this question of what needs to be added to a CER template is simple and you guessed it correct. Claim, Evidence, Reasoning are the three sections. But, in order to give you a deeper understanding let me explain this with an example.

Tips for providing the right wording

Know the subject you are dealing with and use relevant language to make readers understand. For example, a scientific study and engineering study varies as given in the case. So use the appropriate wordings based on the community that will read your CER.

Give an explanation to make things clear and do not assume that the readers will be aware even if it is a small thing.

Lets now do one CER with an example

From the above study, you can understand the different types of claim and the evidence collected for the same.

How to Implement the Claim, Evidence, Reasoning Framework in the Classroom Step by Step Process

How to train the students

So far we have been addressing as to what is CER, things needed in a template, the right wording to be used etc. In this section let us help you understand the right way to educate students. Yes, they need to be taught a foolproof method to implement claim, evidence, reasoning in real life. This will allow them to study lessons quickly and also they will remember the concepts forever.

During the initial days of studies, children will follow the instructions told by the tutor. They may not think or ask many questions. But, once they start asking doubts, then you must know that they started thinking and it is the ideal time to introduce CER to them.

Yes, you need to talk to them a lot about this technique. Simply, telling them to do a CER analysis might not help. They should get convinced about the importance of the model. So, begin with explaining them about claim, evidence and reasoning.  Let them know that this method will help them to think with clarity. Give ample examples to support your teaching.

You must take one scenario that interest students the most. It can be Does eating ice cream causes cols every time? This is your question. You can bait their attention with the very work ice cream. Now, you can ask the kids to express their opinion. There will be few denying to this question and some accepting that ice cream causes cold. So you now group them.

Tell them that there are two claims for the question. Claim 1 is No ice cream does not affect and Claim 2 is it does affect health. So they will easily understand what a claim is.  The claim part is taught to them within no time.

For each evidence instruct students to reason as to how, and why. This will lead to a better understanding they will conclude on their claim.

Remember in the scientific study you must tell them that, this evidence is the studies and investigation performed on a decent sample size to back their claim.

I am sure students will understand clearly about CER.

Step 3 – Give them group exercise

To build in confidence you must make them in groups and assign them several questions. Ask them to perform CER analysis. Discuss in the classroom.

Step 4 – Its time to work individually

Allow students to pick up questions and perform CER analysis. You can check them and fine-tune their understanding.

Start doing CER for all subjects to help students understand the differences and similarities. So they will get a hold and can now implement CER independently.

How to grade CER work

Claim, evidence, and reasoning method must be evaluated. The grading plays a role here. Not all claims are correct even if they manage to get evidence. The authenticity of the claim must be validated and grading does that. There are several grading templates available online and you can use them to score the CER work. Also, it is not difficult to design a simple framework on your own.

You can have three grades like A, B, and C.

A – Accurate claim and provided proper evidence. Also, was able to do a thorough reasoning.

B – Makes a vague claim. Evidence consists of relevant and non-relevant data. Reasoning links are not sufficient.

C – Does not make any claim or completely makes a wrong claim. Not able to show evidence and no reasoning done.

Therefore, all the three grades primarily rely on the claim. If the student understands the claim, then collecting evidence and reasoning falls in place. Failing to make a proper claim takes everything in the wrong direction.

We have listed the impact of CER and also provided a study that has conducted a detailed study to let you know the importance of CER.

Introducing CER at this level will become a practice in life and they can approach all subjects with clarity.

difference between evidence and reasoning